Erebor: The Lonely Mountain - A Review 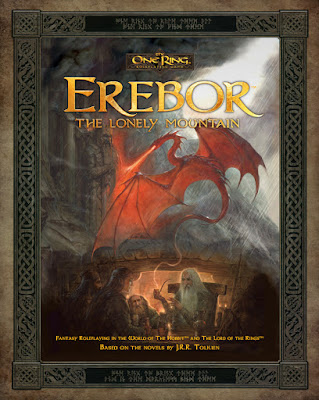 Its been a little while since I've been around here, life has been busy and keeping up with this blog has been a challenge.  I'm back today with a review of The One Ring supplement Erebor: The Lonely Mountain.  More after the break!


I LOVE Dwarves, they've always been my favorite race whether its D&D or Tolkien.  I know that the Elves are the darlings in Tolkien's world, as the children of Ilúvatar they are the heroes of many, many of Tolkien's stories.  The Dwarves on the other hand seem to get a lot less coverage but ever since I first read the Hobbit and the Appendix A - Durin's Folk, I fell in love with the tough, serious, funny and honorable Khazâd.  I'm very pleased with this product as the subject matter is right up my alley.  Lets get started!

The first chapter is titled The Kingdom Under the Mountain, it deals with the history of Erebor and is broken into eight sections starting with the Founding of Erebor (1999-2210) and ending with The Restoration of Erebor (2941-Present).  Each of these sections is a couple of paragraphs long and describes that particular era of Erebor is more detail.  There is some great background information that helps to fill in the history of the Lonely Mountain.  Included is a very nice full-page plan view of Erebor that shows the multiple layers overlapping tunnels and rooms.  It looks very nice but is pretty much unusable due to the overlapping layers blending together and the fact that even at 8.5x11 its just to damn small to see (or maybe its my old eyes).  Maybe a 18x24 printed map version would be more useful.

The interior halls of Erebor are also covered, The Upper Halls, Front Gate and other various sections of the Dwarven stronghold are described in some detail giving Lore-masters new and exciting areas within the mountain for their fellowships to explore.  Various inhabitants are also described including the Stone Guard, the Iron Guard and the Smiths of Erebor.  There are sidebars on entering the Lonely Mountain (better be a dwarf), the Kings Council, visiting Thorin's tomb and the Arkenstone of Thrain (bling, bling).  A list of notable characters follows, King Dain Ironfoot, Roac the Raven and all of the surviving members of Thorin's Company and fleshed out with stats and character bios.

To round out the chapter is a short list of things to do in Erebor, some good, some bad.  Those with the Dragon-sickness shadow weakness will be tempted by the great wealth left behind by the mighty Smaug.  Four new fellowship undertakings are available including Paying Homage to the Ravens of Ravenhill, Searching the Deep Tunnels of Erebor, Helping the Dwarves to Compile the Erebor Index and Studying with a Master Craftsman (of course!).   It's a really great chapter that fleshes out the dusty old halls of Erebor and makes it feel like a long forgotten place that has had a fresh breath of air blown back into it.  Overall a really useful chapter and it was a lot of fun for me to read.

Treasures of the Dwarves is the second chapter and opens with the following quote;

On silver necklaces they strung
The flowering stars, on crowns they hung
The dragon-fire, in twisted wire
They meshed the light of moon and sun.

Beautiful stuff and a great way to open the chapter.  One of the reasons that I love Dwarves is their mastery of both stone and steel, there has always been something very satisfying to me in the creation of something beautiful or useful using ones own hands.  This chapter is dedicated to that same idea and expands upon the rules introduced in Rivendell for creating wondrous items.  If an item is found to be of Dwarvish make then and additional step is taken to find out which Dwarven mansion created it, Norgrod and Belegost, Khazad-dum or Erebor.  Each mansion has different qualities and specializes in different types of items.  There are four new enchanted qualities for Lore-masters to apply to items they create and there is also a list of six famous Dwarven weapons and armor, my favorite being the War-mask of Belegost (there is a fantastic illustration of it, it looks fearsome!).

The chapter closes out with rules for Dwarven-smithing, a new fellowship phase action that allows for the creation of epic items over long periods of time and introduces Great Materials which can aid in the process.  These items can be the basis for some adventures and should not be easy to obtain.  I enjoyed this chapter a lot, I really enjoyed the item creation rules in Rivendell and this chapter expands on that.  Have fun creating your own Dwarven-made items!

The third chapter focus on Dale and follows a similar layout to the Erebor chapter.  It starts with the history of Dale, broken up into sections that are several paragraphs long and which include a sidebar on the relationship between Dwarves and Men.  There is a very nice map of Dale, much more useful than the Erebor map, it is easily read and includes twenty three locations around the city like the South Quay, the Royal Palace and the horrible sounding Nest.  The City of Dale gets a detailed break-out over the next couple of pages with each section describing the various areas of the city in more detail.

There's a very nice full page sidebar (if its full page is it really a sidebar?) on describing Dale with tips to impress the players on the beauty and the hustle & bustle of the city.  Nobles, merchants, royal archers, the city guard and healers all get basic stat blocks.  Bard, King of Dale along with Queen Una the Fair and two other important persons all get a full work up.  This section also ends with a Things to do in Dale section with five new fellowship phase undertakings; Commission a Smith of Anvil Way, Join the King's Hunt, Offer Counsel at the Royal Court, Stay at the Missing Scale and Take Apprenticeship with a Dwarven Smith.

What follows is a chapter on the lands surrounding the mountain, this is similar to many of the other The One Ring products in that it describes the wildlife, inhabitants, notable characters and places but in the following regions; The Northern Dalelands, The Waste, The Grey Mountains, The Upper Marshes and The Nether Marshes.  Great information for any Lore-master running adventures in the surrounding regions.

The fifth chapter is called Concerning Dragons and it is all about ghosts.  Just kidding, its about f**king dragons you silly fools!  This chapter was a LOT of fun for me, whats more exciting that creating your own dragon from scratch to throw at your player's?!  Well a lot of things, but making your own dragon is pretty high up that list if your a nerd like me!!

Things kick off with a warning that dragons should not be common place and should be the culmination of a campaign in which they are the ultimate baddy and should be treated as fearsome and dangerous foes.  All good advice.  After you read through that you get to hatch your very own wyrm which is a six step process that I'll quickly go through.  Step one, choose a breed. There are three options, Cold-drake, Fire-drake and Long-worm.  Step two, choose an age.  This involves looking at a chart, the older the dragon the tougher and more capable he is.  Step three, define personality.  Figure out what type of temperament you want it to have and pick some traits and abilities.  Step four, choose special abilities.  There are 17 different abilities, depending on the age bracket they can choose anywhere from three to nine of these.  Step five, compile weapon characteristics and choose weapon skills.  This is just figuring out what kind of damage your dragon can wreak!  Step six, choose a name and backstory.  Self explanatory.

Last but not least are the rules for Dragon-hordes.  There is a table of suggested horde ratings and a list of wondrous items to include in your dragon horde to give it a bit of flavor.  There are also four dragon-bane items detailed which range from brooches to spears.  I guess if you add dragons, giving the players items to help defeat the beasts is a good idea!  To close out this chapter there are two dragons of the Third Age who are detailed.  Stats are given as well as background information, all good stuff if you need a quick dragon to use.

The sixth chapter deals with the history of the War of Dwarves and Orcs.  This chapter is detailed information on the war fought between the Dwarves and the Orcs that culminated in the Battle of Azanulbizar.  The different periods of the War are described and there is a sidebar on Dwarf player heroes that might have fought in the war, it's great role-playing information for anyone that is playing an older Dwarf.  This information was first detailed under Appendix A - Durin's Folk in The Return of the King, its always been one of my favorite parts of the book, almost mentioned in passing but chock full of Dwarven history.  Its a great read and neat to see it here.

There's also a two page sidebar that's called Blighted Dreams, it details rules for haunted places and what can happen to players that spend to much time is such sad and terrible locations.  The chapter closes out with a list of Wondrous Artifacts from the War and also rules for developing Dwarven grudges (is there a better kind of grudge?).

This is a fantastic book, lots of world building information for Lore-masters creating adventures in the regions around Erebor.  The expanded crafting rules are sweet as are the dragon creation rules.  This is another wonderful product from Cubicle7, they keep cranking out some amazing products!  Two thumbs up, this book is a must buy!  Stay tuned for the upcoming review of the Adventurer's Companion!!

Email ThisBlogThis!Share to TwitterShare to FacebookShare to Pinterest
Labels: Role Playing, The One Ring, Tolkien