Heya folks!  I'm back with another artist interview, this time with the amazing Peter Mullen!  His strong black and white and colored pencil work has been included in multiple gaming systems, including DCC RPG and Swords & Wizardry.  He's an amazingly talented artist that has been a big inspiration to me, I'm very proud to introduce to you, Peter Mullen!  More after the break!


I was born and raised on a little family farm in the rural central western mountains of Pennsylvania were I currently reside with my wife and kids. 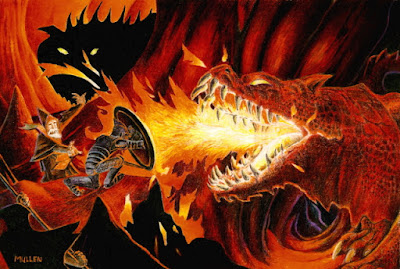 I’ve been drawing since I was very young and I was fortunate enough to have people in my life put some sketchbooks in my hands throughout my childhood, my grandfather being the one in most cases. He continuously encouraged me to use my talents and was always a great advocate for me to draw. So, when my older brothers were working out that top secret code that relayed the location to the rebel base aka -their new tree house hidden somewhere out in the woods that little brothers weren’t included in -I’d take my sketchbook out and draw in it. Mostly dinosaurs and monsters and little stick-figure army men fighting them. This would later become drawing monsters on the dungeon maps when we would be playing Dungeons and Dragons or Star Frontiers.

My style of drawing reflects being a product of/and growing up with the science fiction and fantasy of the late 70’s and throughout the 80’s. I was captivated by anything that dealt with spacemen and dinosaurs, super heroes, robots, strange aliens and monsters. In creating my work, I strive to make it part perilous, heroic, weird, and yet still containing all the whimsy and ridiculousness which can and should exist in these little glimpses of other worlds.
In terms of where I draw my influences from, I would say my initial exposure to these things was through a couple of old books from the very small local and school libraries, a sparse collection of comics and what was being broadcast on the two channels we got at the house over the antennae which could be hit or miss depending on which direction the wind was blowing.
Despite these limitations however, we managed to cultivate an enthusiastic interest in sci-fi and fantasy! My brothers and cousin Jesse have given me nothing but constant support and encouragement in making my work and relentlessly add books, movies and anything else they can find to my reading/viewing list. If not for them, I would never have found even a fraction of the amazing and inspiring things that have gone on to influence my work at this point. 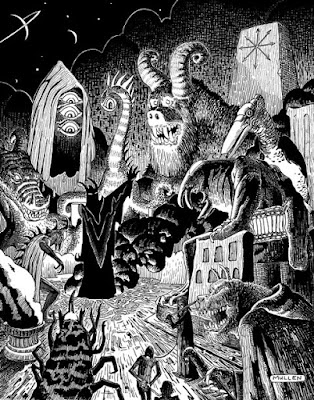 I’ve been influenced by a lot of artists and still find new ones as I keep searching around but in terms of my fantasy work I would put Hayao Miyazaki, Erol Otus, David A. Trampier, Alex Raymond, Michael Whelan, Frank Frazetta, and Jeffrey Jones way up on the list.

I’ve been working as an adjunct instructor between two colleges where I live for the last few years. I usually teach drawing and ceramics. Illustration is done throughout but not full-time.

Drawing and painting landscapes and illustration work are my favorites.

I’ve been playing D&D since the early 80’s when my parents got my older brothers Star frontiers and the Moldvay Basic Set for Christmas. Eventually, I was included, but I remember really liking all the illustrations when I got the chance to look through them. We played this version of D&D until my brother got the AD&D books but that was as far as we ever went as editions go. My high school friends and college buddies played 2nd Edition D&D but my brothers and I always stuck with either B/X or AD&D which we played up through to our adult years.
With my own kids, we try to get a game in when the schedules work but it can be hard without a set schedule which is why they like DCC RPG which has a “pick-up and run with it” aspect that works for us.
I like the story-telling aspect of illustration work the most which is what most RPG art is attempting to do. You are trying to give some visual inspiration to both the GM and players that serves to enhance the written aspect of the encounter. One of my principle aims when working on a project is putting in enough detail to describe what is happening and leaving enough out of the drawing to get them to wonder what else might be around the corner or whether the giant horned skeleton is going to rise from his throne to strike down those greedy little murder-hobos… 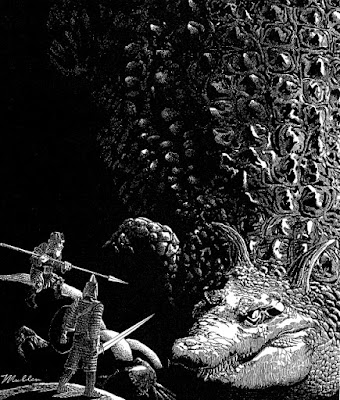 I was working on a number of things here and there in the OSR circles and after a while sent some drawings over to Goodman Games to see what he thought. Joseph Goodman wrote back about a project he was working on that he thought my style would work well with. Completing “Y is for Yellow” and the end sheet illustrations for the Dungeon Alphabet was a great experience both in the production of the work and in Joseph’s art direction which is always insightful and keeps me on my toes! The next assignment Joseph had for me was some interior illustrations for DCC RPG!

Astonishing Swordsmen and Sorcerers of Hyperboria by Jeff Talanian and Mutant Crawl Classics by Goodman Games.

No matter how old I get the 70's Scorpions (primarily the first three albums.) are my go to band. Other bands include Blue Oyster Cult, Witchcraft, Rainbow (with Dio!), Black Sabbath, Led Zepplin, Monster Magnet and Rolling Stones.

Reading is one of those things that I get to do on a limited basis, but I love to read! Sadly, to get drawings done I can't read as much so I finish a book about every three or four months. Most recently, I finally finished Gene Wolfe's Return to the Whorl. Other favorites include Vance's Dying Earth, Demon Princes, Planet of Adventure series, Gene Wolfe's New, Long, and Short Sun, Phillip Jose Farmer's Dark is the Sun, Leiber's Lankmar Books, HP Lovecraft, and Clark Ashton Smith amongst others.

I loved Hawaii and can’t wait to go back someday.

The power to ignore the need for sleep. I would get more done.

In this digital age, everything is at your fingertips. Whatever and whenever you want it! I’d say that when you find something you like or are drawn to for whatever reason, to stick with it and explore why you like it. Ask yourself how you would have done it differently and why?
I mostly learned to draw by seeing other things like movies, comics, and from ideas after reading books and then drawing in my sketchbook constantly. Movies like Forbidden Planet, Dragon Slayer, Dark Crystal, Star Wars, A Boy and his Dog, Bakshi’s Lord of the Rings and Wizards, Light Years, and shows like Outer Limits, Star Trek, the Herculoids and of course Thundarr the Barbarian all had a huge influence on me and my work.


I always strongly suggest to my art students to keep a sketchbook and draw in it to explore ideas and experiment with various techniques as much as possible which goes with the philosophy that we learn by doing which in this case is drawing. 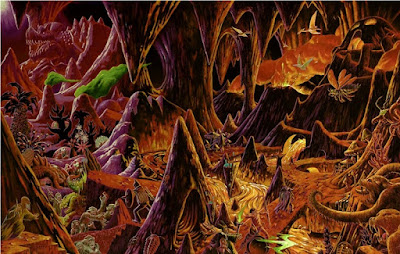