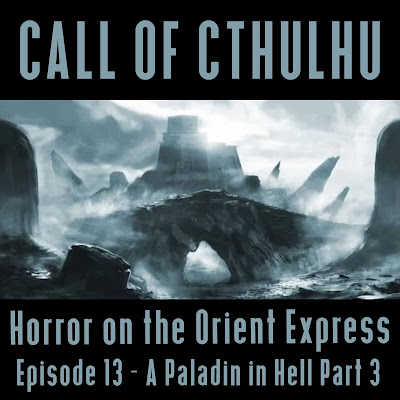 Reginald awakes with a mysterious claustrophobia and consults Lakeby and Dr. Gaspari. Professor Grekov continues his research in the Paris Library. Father Kane continues his quest to escape the Dreamlands with assistance from Nuggoth-Yug.

Posted by Jason Carter at 11:48 AM No comments:

Horror on the Orient Express - Episode 12 - A Paladin in Hell Part 2 Now Availible! 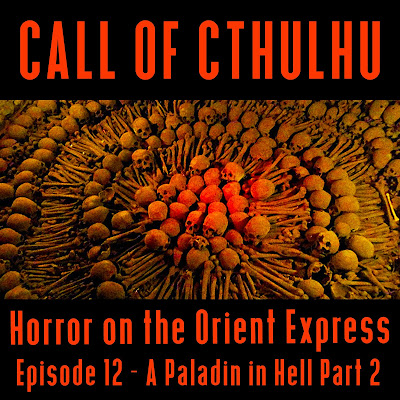 J.J. and Reginald descend into the catacombs under Paris to search for the missing Father Kane. Inspector Thibault searches for more clues into the mysterious Turkish Businessman. Professor Grekov continues his research into the information provided in Beddow's Notes. Father Kane must contend with the giant creatures encountered in the spiral city.

Posted by Jason Carter at 5:56 PM No comments:

Horror on the Orient Express, Episode 11 is now availible. We are back! 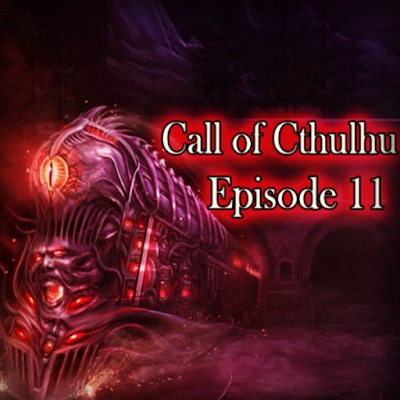 Our Call of Cthulhu podcast is back after a long hiatus! Catch up with the gang for episode 11 - A Paladin in Hell Part 1! J.J. Whipple meets with Father Richeau to discuss the whereabouts of Father Kane while Inspector Thibault investigates a report of a Turkish businessman in the city. Professor Grekov makes his first breakthrough in his research.

Posted by Jason Carter at 7:50 AM No comments: 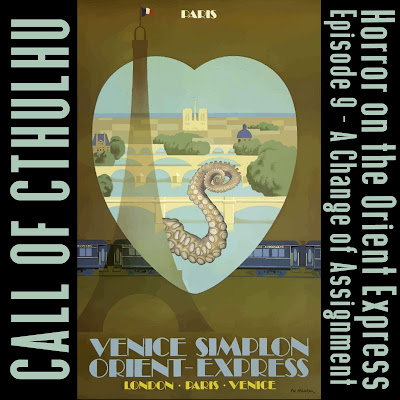 The Investigators arrive in France with a trail of bodies left in their wake and the Gendarmerie take notice.
Posted by Jason Carter at 9:37 AM No comments:

Welcome to Jeepers Keepers! We have a lot of ground to cover, so let's jump right in!

"What do you do?" is probably the most-asked question by anyone running a tabletop roleplaying game. It's also one of the most exciting questions, fraught with potential because the answer can be anything. During a Call of Cthulhu session I was running a few years ago, my then-9 year old daughter (who had been listening peripherally), answered, "I turn into a cat and sneak through the window!"

Of course, as we get older, we tend to interpret that question to infer that the answer will be something possible within the rules of the game we are playing but that still a whole lot of wriggle room on the part of the player.

As a Dungeon Master/ Game Master/ Keeper of Eldritch Lore/ Lore Master/ etc we have a very powerful tool in our GMing box that can help us fine-tune that response to a point where we can seem pre-cognitive: setting the scene.

A GM sets the scene in many ways: by revealing a new section of a map laid out before the players, describing strange runes on an ancient door, what lies in the chamber beyond that very door, or a malevolent smile as a player tells you they are opening the door without checking for traps first. A scene can also be set up by playing music (Music is a great way to set up a mid scene change -- more of that in the next post), or in stopping music that was already playing.

Our imagination will go a long way in helping us come up with colorful descriptions, but we also shouldn't turn our nose up at having a list in front of us with key evocative words or even pre-scripted text if it will help add atmosphere and drama. (Yup, there will be posts about that as well)

Let's listen to a couple of examples from Episode 1 of my of actual play podcast running Horror On The Orient Express for Call of Cthulhu 7th edition.


This scene is set up by means of a verbal "establishing shot", a top-down explanation of the world outside the scene itself. The virtual camera then closes in on a specific location (a music hall), and then a specific person (the Player Character). We learn that London is gearing up for the holidays and is in a festive mood even though there hasn't been any snowfall yet. We know the date and time of day. We also learn that the Player Character is a performer.

Here's another example from the same episode:

This scene is set up a little different. We get just the basic details here: a priest is relaxing in his apartment attached to a London parish, reading the newspaper on a Sunday afternoon, when he receives an unexpected telephone call.

One thing that both of these scenes have in common is the lack of the question, "What do you do?" One reason for that is because I typically reserve that question for when I have set up a dilemma for the players (There will be a post on dilemmas coming soon). Since I don't need specific information, I'm willing to wait and let the player carry the story forward. With less experienced players, you may need to plant a bit of action into your setup so that they know that's their cue to act, but more experienced players will interpret that pause as an invitation to join in the storytelling at that point.

I hope you found this short discussion on setting up a scene helpful! There are several other aspects to setting up scenes that will be covered in future posts.  How about you? How do you like to set up a scene? Does it differ when you are running a pre-written adventure compared to a home brew one? Comment below and keep the conversation going!