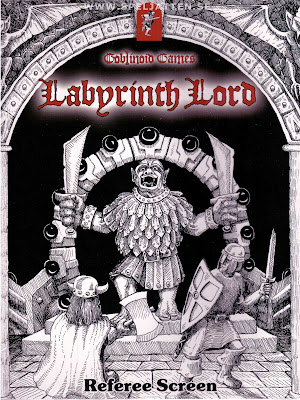 For those of you that have followed my blog for some time you are aware of the Our Favorite Artists posts that I have done in the past, well today I am sad to inform you that Steve Zieser, one of my favorite artists and an interviewee for the site has passed away after a ten year battle with cancer.

Steve helped to inspired me to get back into art after after seeing his wonderful cover for the Labyrinth Lord Referee screen and his many other D&D themed pieces. I will always be thankfull to him for the inspiration and for taking the time to answer my questions.

My heart is heavy to hear of his passing, my condolences to all his friends and family, you are all in my thoughts and prayers.

Stop on by his Facebook page and leave a few kind words: HERE
Posted by Jason Carter at 8:25 AM No comments: 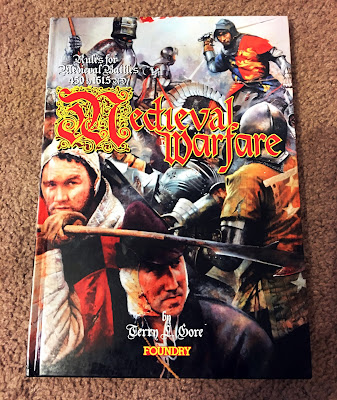 The Drunk Umber Hulk Xmas Sale continues today with Medieval Warfare miniature rules by Wargames Foundry.  This is a very complete set of rules for conflict in the medieval ages, the dates covered are from 450CE to 1515CE.  This 150 page book won GAMA's Best Historical Miniatures Rules of 1998 at Origins 1999.  It includes the rules and eight pages of color images of various miniatures.  There is also a miniature painting guide, colored flags you can copy and add to your army and a guide to building a medieval house including a pattern that can be cut out.

You can own this wonderful set of rules for only $20.00 + $6.00 in shipping.  Brand new this game sells for around $37.00 + shipping from Wargames Foundry.  First person to post in the comments below is the new owner, payment is only accepted through Paypal!

Posted by Jason Carter at 7:54 PM No comments: 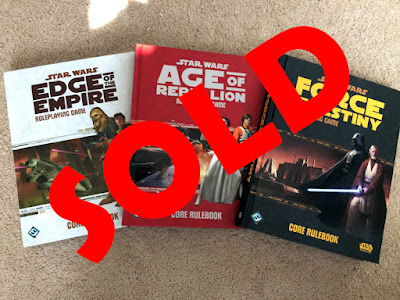 With the new Star Wars movie opening up this week I figured now would be a great time to find a new home for my Star Wars RPG books.  I have never used them and probably never will, so I am hoping that they go to a good home and get some serious use!

I'm offering all three of the core Fantasy Flight Games Star Wars RPG books (Edge of the Empire, Age of Rebellion and Force and Destiny) for $90.00 plus $10.00 in shipping.  These are gorgeous books with wonderful full color illustrations.  My role playing time is at a premium, as is my self space and I will never have the time to play these wonderful games and hope someone else can use them.  I am also throwing in one set of the Fantasy Flight Star Wars RPG dice for free!  FREE!! Retail on these games is $59.95x3 + $14.95 = $194.80 directly from FFGames.  Purchase now and you are saving almost a hundred clams!  First to comment below gets the games, I take Paypal only for payment.

Keep an eye out on this space as I will be posing more games for sale over the next week or two as I clear out my selves!
Posted by Jason Carter at 1:22 PM 5 comments: 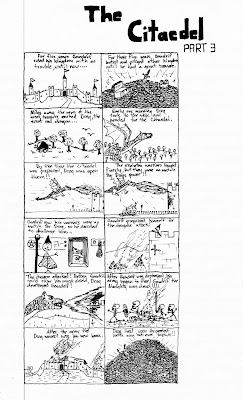 Here's the final episode of my 1980's childhood fantasy story.  It's been fun posting these, it was a nice trip down memory lane.  Today's episode involves the Dragon Drog, totally inspired by Smaug.  I had intended to continue on and create other stories but lost interest.  I hope you all enjoy!
Posted by Jason Carter at 7:00 PM No comments: 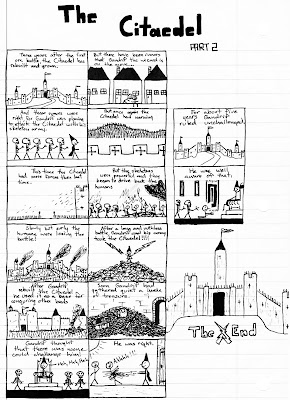 Here's part two of my Citaedel (sp) comic series from the 1980's.  Enjoy Gandrif (I wonder what other wizard name that is ripping off?!) and his army of skeletons!  Part three will be arriving soon!
Posted by Jason Carter at 4:16 PM 2 comments: 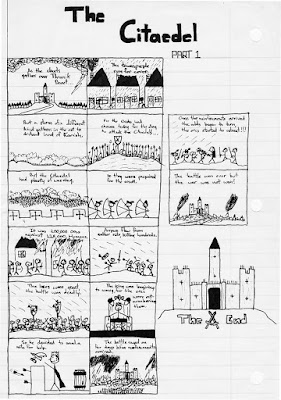 Above is the first of a three part comic I drew back in middle school, some time in the 1980's (am I that old?!  Sheesh).  The title is obviously misspelled and the art and story are atrocious, but its not without it's childish charms.  My friend recently found these in the bottom of a drawer so I scanned them in and am sharing them with the world.  Please enjoy and I will be posting the next two parts in the next week or so.
Posted by Jason Carter at 4:18 PM 2 comments:

My wife and I have been playing through the original Command & Colors: Ancients box.  This week we played the Battle of Lake Trasimenus.  We are alternating who picks which side, I pick one game and she picks the next.  This game it was my choice and I ended up with the mighty Carthaginians.  I thought it wold be a breeze for me, she started pinned back against the lake and with only two command cards.  Woah was I wrong, her dice were hot, hot, HOT!

My initial attack focused on her left flank, I sent wave after wave of cavalry in but her units beat back everything and wiped out my mounted troops. After the first couple of turns she was way ahead in banners due to a piss poor display from my cavalry.

Her troops surged forward on my left flank and crashed into my waiting infantry.  At this point she was winning four banners to my two banners.  Then came the best card in the deck, Clash of Shields.  After she moved her troops into contact I played this wonderful card which gave all my troops in contact the ability to battle with +2 dice.  This essentially won the game for me, I collected four banners in one turn to seal the victory!  She was heartbroken and I was elated!

We had a ton of fun as always and plan to play the battle of Cannae next, I'm sure I will be playing the doomed Romans!

Posted by Jason Carter at 3:38 PM No comments:

Email ThisBlogThis!Share to TwitterShare to FacebookShare to Pinterest
Labels: Board Games 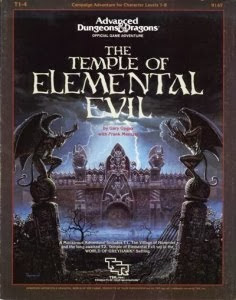 Now that my run as DM of the ToEE is over, I wanted to provide you all with the files that I used to run the adventure.  Below is a link that contains everything that I needed to complete the Temple including conversions to 3e, images, and all kinds of additional stuff I found online.  I hope this is as helpful to you as it was to me!

Just a note, I cannot take credit for 99% of the stuff in this file.  Most of this is the fruit of others hard labor, I just downloaded it, made some small adjustments for my campaign and ran with it.  I was able to find Daniel Rivera, he did all of the stand alone NPC sheets and Banesfinger did the Verbobonc City Guide.  I could not find who had done the conversion of the Temple, it may have been someone named Majin over on EnWorld but I am not certain.  If anyone knows the original authors, please contact me so I can give them credit!

So on to the files, here is a breakdown of what is included in the .zip file;

Then there are a number of loose files:

Finale - The final conclusion for my party, includes the aftermath and awarding of goods and titles to the characters.

Iuz the Evil - 3e conversion of the demi-god.

Navigating the Finale - My own personal road map for the final bits of the temple, how to get to the end.

New Monsters for the ToEE - Juggernaut, Werejackle and Water Weird all converted to 3e.

Temple History -  As titled, my characters were in Verbobonc and did some research into the history of the temple, I gave them this to read.

ToEE Main and ToEE Nodes - binder cover-sheets I made, feel free to use them!

So that's everything (I think).  I hope you guys get some use out of this, feel free to post elsewhere but please at least link back to my site.  Thanks and enjoy! 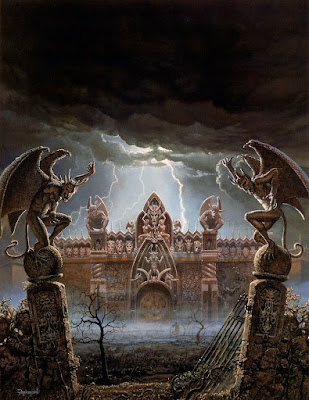 This last weekend my friend and I finally set aside time for the Temple of Elemental Evil!  December 2013 was the last time we got together to roll some dice in person.  We had been playing some DCC RPG via the Internet but really wanted to get back to our ongoing campaign.  I drove down to North Carolina to visit him and we crushed out the final bits of the Temple in what proved to be a satisfying conclusion to a VERY long campaign (8+ years!)

MASSIVE SPOILERS AHEAD - PROCEED AT YOUR OWN RISK.

YOU HAVE BEEN WARNED!  Story continues after the break! 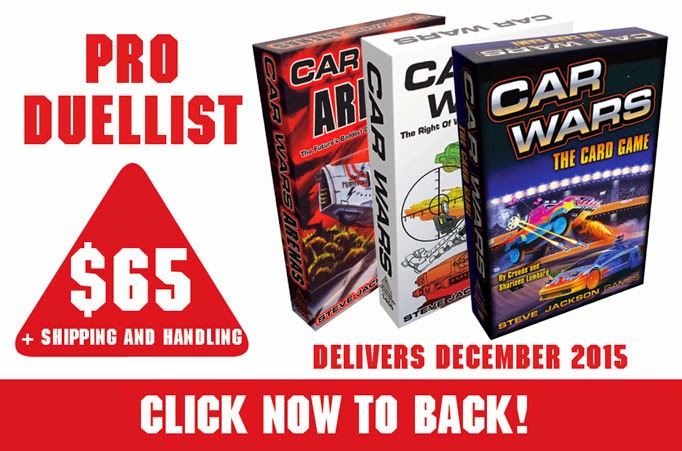 The Kickstarter campaign for Car Wars Arena's will be finished in 44 hours!  They are approximately $2000 away from the next goal of $85K which will give everyone free issues of ADQ.  If they reach $90K Car Wars Arena's 2 is the prize.  If you have not pledged yet, now is the time!  If you've already pledged maybe its time to review your pledge, for $65 you get a copy of Car Wars Arena's, Car Wars Classic and the new and updated Car Wars Card Game!

Pledge now and don't miss out on this great package deal!


Posted by Jason Carter at 7:16 PM No comments:

I'm back with some Car Wars news, the Kickstarter project for Car Wars Arenas went live earlier today! The goal is $50,000 in the next four weeks with nearly $25,000 already pledged today. The box will include five 22x34" arenas with a booklet that includes special rules for each. Stretch goals start at $75K and go up to $150K. They include additional maps, double sided maps, a Car Wars patch, custom dice and at the top tier additional dropped weapon and debris counters.

This is NOT for the new 6e version of Car Wars, this is a suppliment for the recently released Car Wars Classic, there are pledge levels that incude this set and the original Car Wars Classic box if you missed out on the first two runs.

Make sure you head over and shell out your hard earned cash to support Car Wars and Steve Jackson Games.  Linky HERE!
Posted by Jason Carter at 8:19 PM No comments:

I finished up my Otherworld Miniatures Level 2 figures yesterday.  I'm happy with how they came out, though the pictures are a bit fuzzy.  Sorry for the quality of the snapshots, I think my lens is messed up, it would not focus and everything came out really dark.  Hopefully you still get an idea of how they look, these are great miniatures with loads of detail!

More pictures after the break!

The rest of this post is picture heavy, enter at your own risk!

Read more »
Posted by Jason Carter at 4:37 PM No comments:

My Taliban forces for Skirmish Sangin are done!  They're all 15mm Elhiem Miniatures purchased from the always awesome Syr Hobbs Wargames.  The technical is from an unrecalled manufacturer, it was die cast and the gun and gunner are both from Elhiem.  I glued the wheels in place, then scuffed the paint and primed it before giving it a white coat of paint.  I think the original color was yellow.

The rest of this post is picture heavy, enter at your own risk! 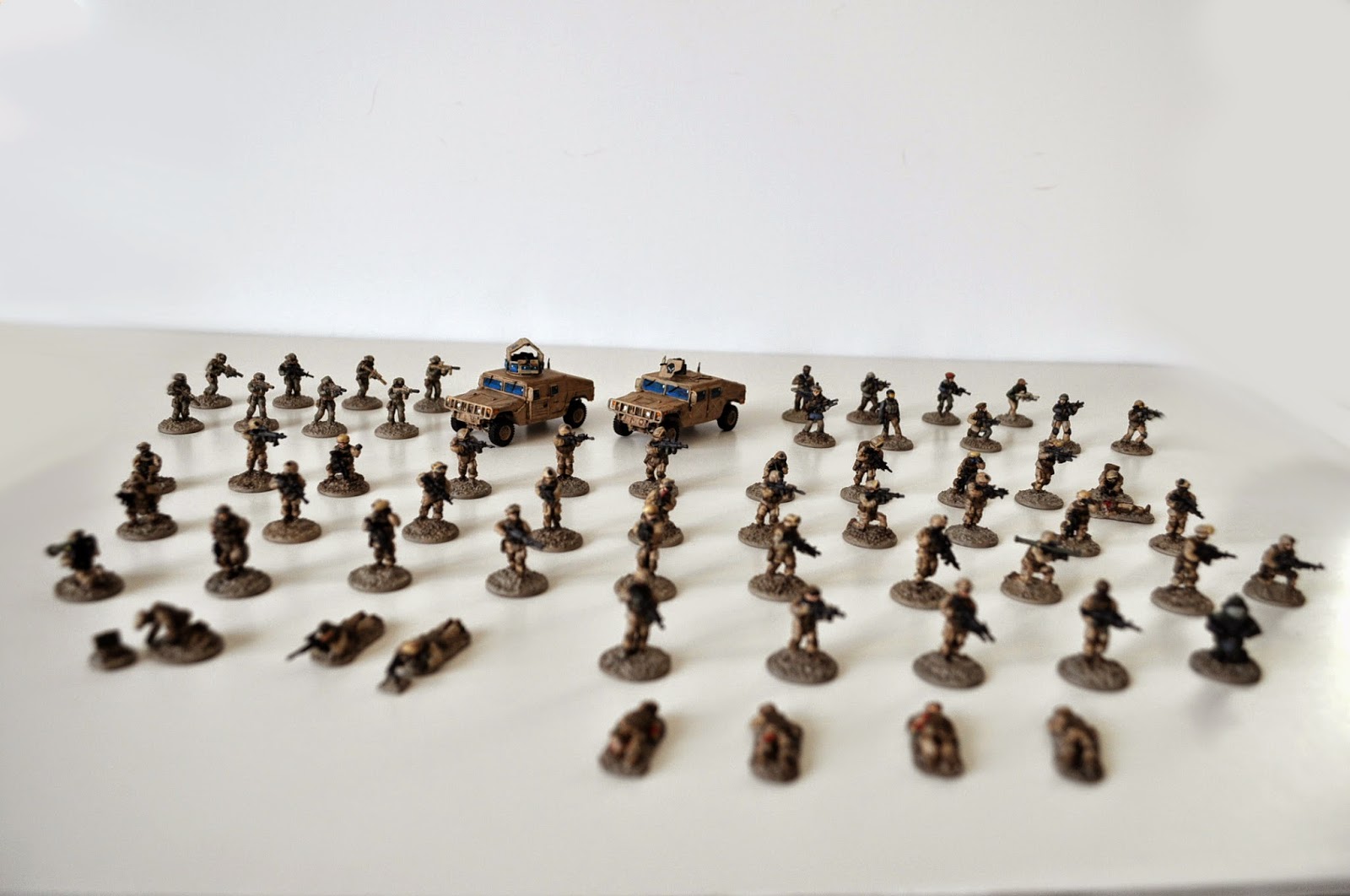 I finally completed my Marine Corps forces for Skirmish Sangin.  These are 20mm Elhiem miniatures painted in various Citadel or Vallejo paints and purchased from Syr Hobbs Wargames.  The two vehicles are Dragon Models 1/72 HMMWV M1114 w/M2 & M1114 w/Mk.19 Up-Armored Armament Carriers, with the one on the left fitted with an S&S Models upgraded turret.  I still have several heavy weapons to paint including a Ma-Deuce and a MK19 Automatic Grenade Launcher but all of the men and vehicles are done.

I am currently working on the opposition forces, I have a mixture of Taliban/Al-Qaeda that are about halfway done, I'll post pictures of them when they are all complete!  For now enjoy my Marines!  Semper-Fi!

More pics after the break!
Read more »
Posted by Jason Carter at 4:20 PM No comments: