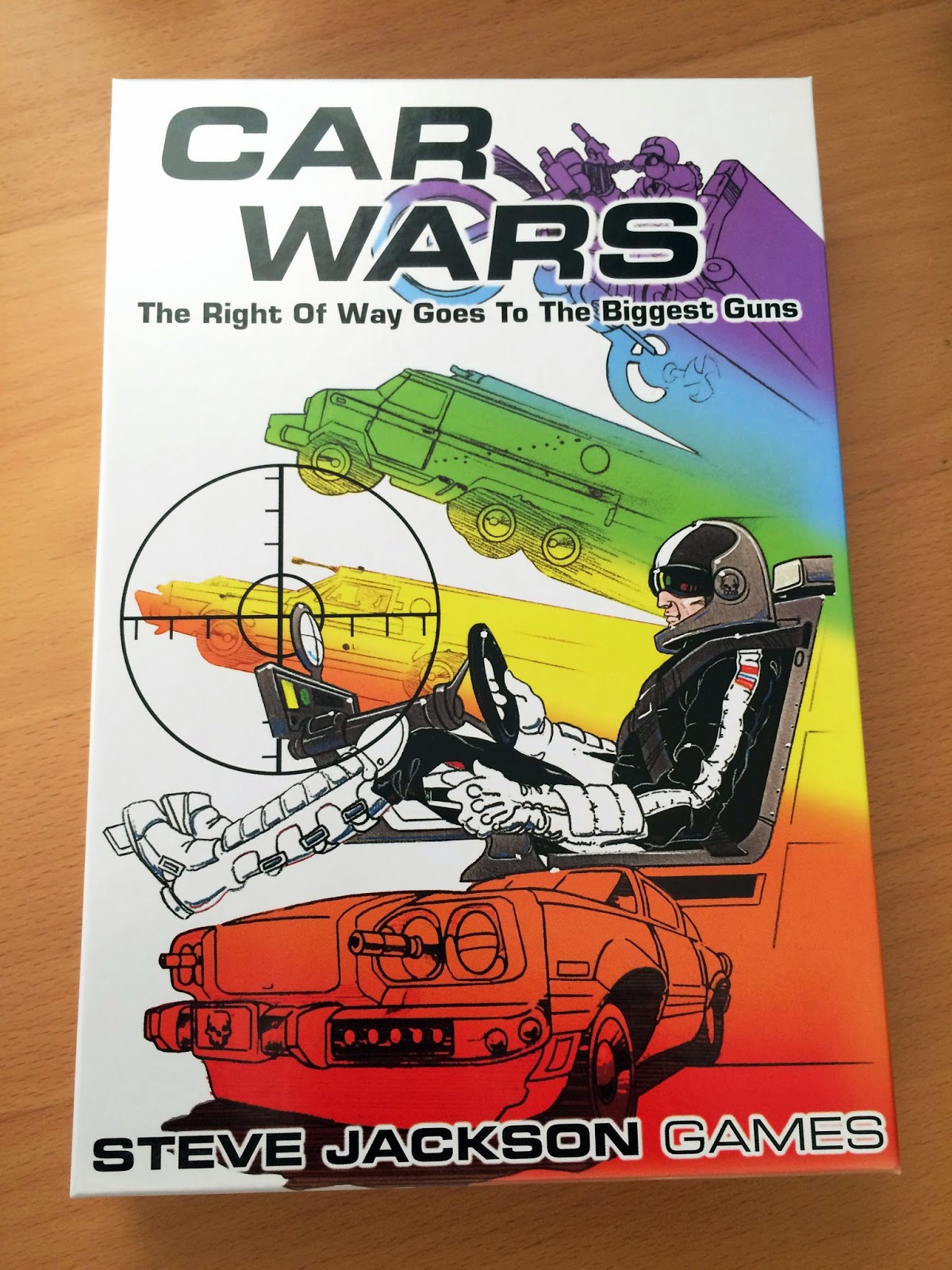 Two days after ordering it online, Car Wars Classic arrived on my doorstep!  The game apparently sold out at Warehouse 23 in around four hours!  This is just a quick unboxing so everyone can see whats in this edition.  Lets get started!

Inside the box is the rulebook which is 64 pages with a saddle-stitch binding.  There are 103 color counters which are double sided, though the vehicles have the same image on both sides which is odd.  There are only two wreck counters, they also have the same wreck on each side.  I would have liked to have seen the cars with their respective wrecks on the back.  I wonder if this was a proofing issue.  Anyway the counters include all of the classic images like the golden van, the limo, the VW Bug, and the red pickup truck.  There are also pedestrians, motorcycles, oil, smoke, gas, spikes, mines, handeling and speed counters, numbered car counters and small and large debris counters.  They are all printed on a much thicker stock and feel very nice.  Also incuded is a turning key as well as well as four six sided dice.  There are two record sheets, one for cars with a weapons list on the back and one for cycles with a vehicle build sheet on the back.


The last piece that included is the map.  It's a double sided map which includes a raceway and an unnamed arena map.


This is a very nice version of Car Wars, small and packed with everything you need.  The only issue seems to be the same vehicle images printed on both sides of the counters, hopefully this will be corrected, I'd love to have the wrecks on the flip side of the counters.

Find a copy where you can and remember, drive offensively!
Posted by Jason Carter at 2:53 PM No comments:

The Fatal Funnel - Sailors of the Starless Sea 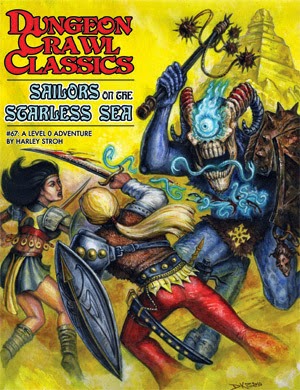 Last night my friend and I finished up our last session of Sailors on the Starless Sea, a level zero adventure for DCC RPG.  We played using Roll20, an online game table which I will be reviewing in the next week or so.  This was the first time either of us had played using the Fatal Funnel and level zero characters. We both had a blast and really enjoyed the experience.

Our initial party consisted of eight characters, we rolled for everything; names, professions, equipment, luck augurs, if there was a randomized chart, we used it. Stats were rolled in order with 3d6, this resulted in lots of lower scores but it also made having a 15 in an ability stat something to brag about! The party started with the following characters with the first four being my toons;

I will be discussing the adventure from here on, read on at your own risk!!

It didn't take long before we took out first casualties, both Publio and Dugar were killed in the very first encounter battling the Vine Horrors! Starting with only one or two hit points and no Clerics to heal is not easy! The party buried their corpses and pressed on. Entering the ruined keep they found the alter room and were able to loot several suits of chain-mail and some weapons but left before encountering the Tar Ooze. Soon afterwards they discovered the Beast-men and Champion in the tower ruins and were ultimately victorious, though Thaug and Thremaim fell in battle. Four down, four left!  They freed the captive townspeople and recruited two new party members, Hekkador and Tonual.  Heading down the stone stairs they discovered a room with several chests and some discarded treasure.  Tonual spotted a hidden compartment in one of the chests but was killed by the trap which cut his hand off, he didn't last very long!  Moving on they found a large room with a brackish pool and murals that lined the walls, they also discovered four tattered robes which they brought with them.  After a nervous encounter with the floating skulls they took one with them as they continued to descend deeper towards the Starless Sea. 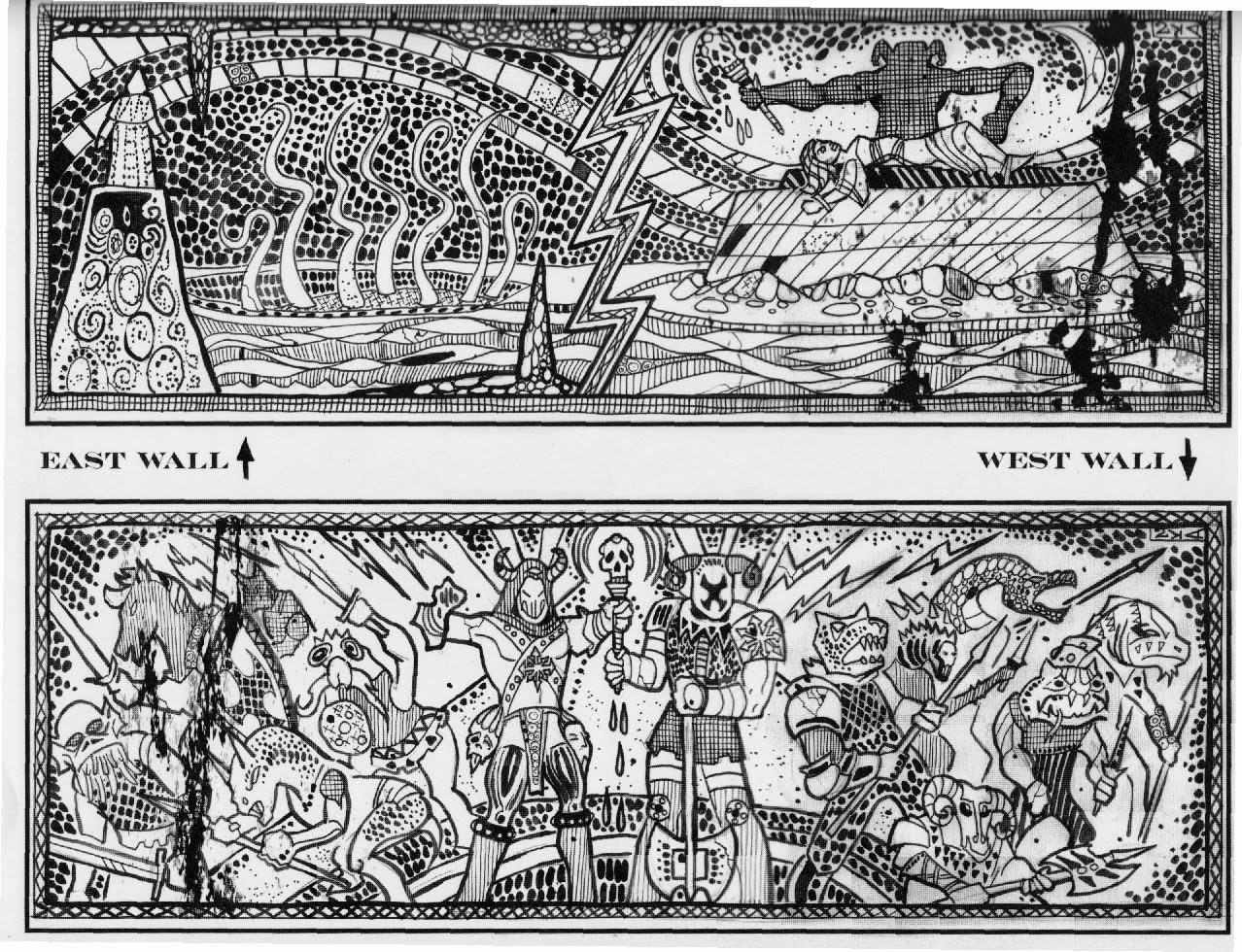 On the beach Hekkador failed his save while looking at the strange symbols on the menhir and suddenly attacked the party, he was filled with the urge to cut out someones heart and feed it to the Leviathan.  Luckily the rest of the party was able to subdue him before he caused any real harm.  They lit the candle on the menhir which drew the dragon boat closer to shore which they boarded.  Halfway to the ziggaraut the boat stopped in the water and the Leviathan made itself known by the score of tentacles that raised out of the water and hung ominously over the boat.  Hekkador knew they needed to present it a sacrifice due to his earlier mental state, but the party was unwilling to kill any of their own.  They readied for battle as the tentacles moved in.  Imogoth fell in the ensuing fight, Leniqua quickly jumped on his corpse and cut out his heart which she threw it into the sea to placate the beast.  The tentacles slipped below the waves and the boat continued onward.  Despite her quick thinking the rest of the party was a little distraught by her actions.

Moving onto the ziggaraut the four remaining party members, Aram, Hekkador, Leniqua and Cerngoth, donned the robes they had found and marched up the ramp towards the chanting beastmen.  Arriving at the top Hekkador discovered the skull he had taken from the pool room was vibrating and glowing, he tossed it into the hellish pit at the top of the ziggaraut.  This caused a large explosion which sent beast-men and party members flying in different dirrections.  They party reassembled and began slaughteriung the stunned beastment but they were unable to stop the beastman shaman from summoning the Chaos Lord.  As he formed they began retreating down the ramp in a fighting withdrawal.  Soon the Chaos Lord was upon them and a raucous battle followed. Luckily there were no deaths and all four lived to fight another day while the Chaos Lord was thrown low.

Soon after the his death the entire cavern began to shake and crumble, the intrepid party helped the townsfolk they had saved onto the dragon ship and they were carried away by a huge wave that swept through the cavern.

The Fatal Funnel lived up to its name.  Our losses were heavy but in some strange way I feel connected to the characters that did survive!  I don't think I would want to play like this all of the time.  There is a distinct lack of things to do each round for the characters as they do not have classes and the abilities that go along with them.  But if you have not tried playing level zero heroes, give it a shot, its a blast!
Posted by Jason Carter at 4:17 PM No comments: