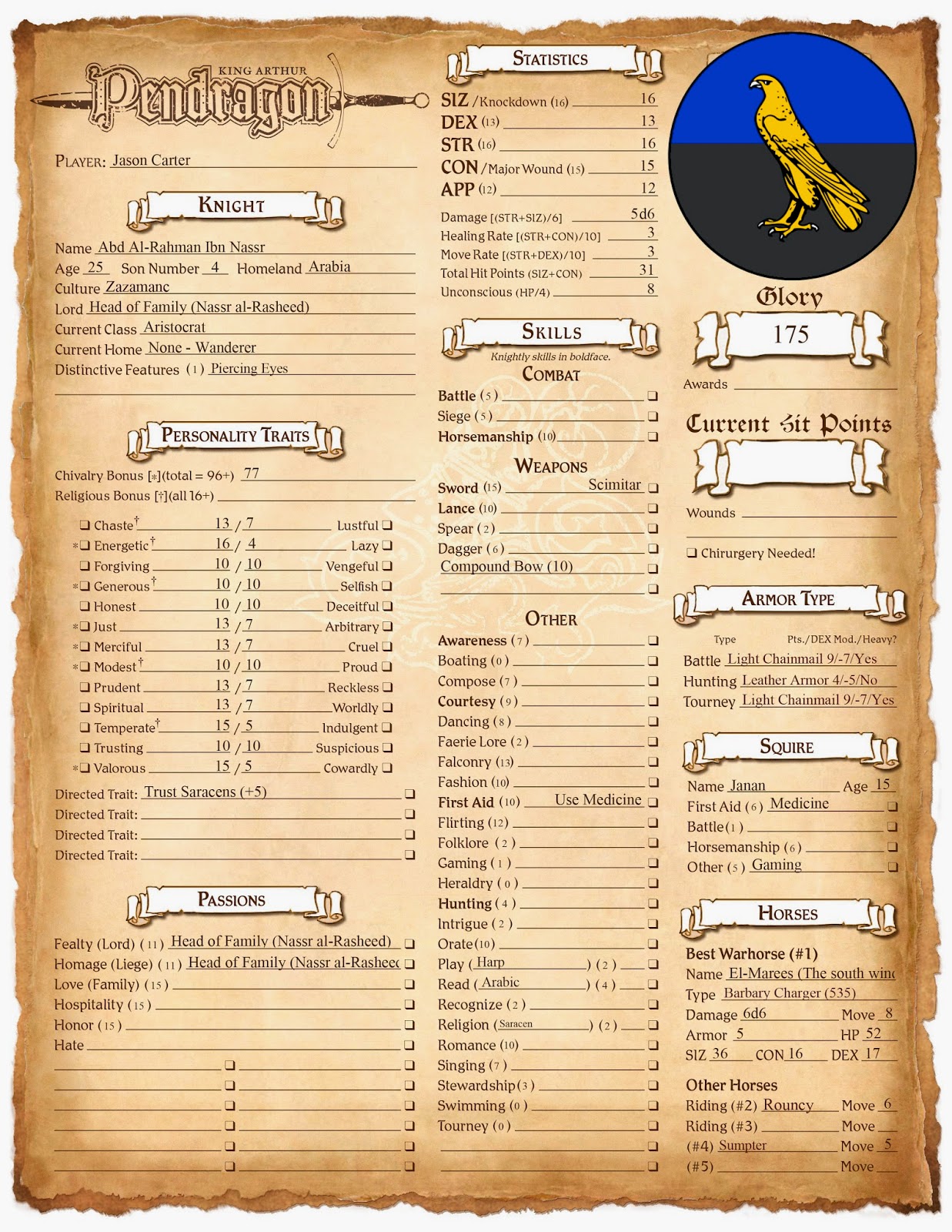 I had so much fun the other day creating a new character for Pendragon RPG I decided to give it another go. Here is Abd Al-Rahman Ibn Nassr, Aristocrat and Knight-Wanderer from the land of Araby. I wanted to make a continental character, one that was outside of the standard Lorges Knight. The process was quite easy, options for creating continental characters in the Book of Knights and Ladies are a little more restricted. Most of the charts dealing with the characters father and his class go out the window so the process is a little quicker.

Some of the changes from the standard British Knight are that he is of the Saracen religion which holds different personality traits in high regard. He is several years older than my previous character, making him a little more experienced. He does not have a manor or hold land as he has recently arrived in Lorges and is son number four, which is why he is out wandering the world and not at home tending to his fathers lands. Nassr is wielding a scimitar and a compound bow, which is considered "unknightly" by the local British knights. He wears light chain-mail and has a round shield and is skilled in the use of Medicine which covers both First Aid (a knightly skill) and Chirurgery (a non-knightly skill).  His mount is a Barbary Charger, swifter than the standard Chargers ridden by the local knights.

Overall I really like this character, he was fun to make and offers a chance to play and outsider that is considered exotic and strange.  Fun stuff! 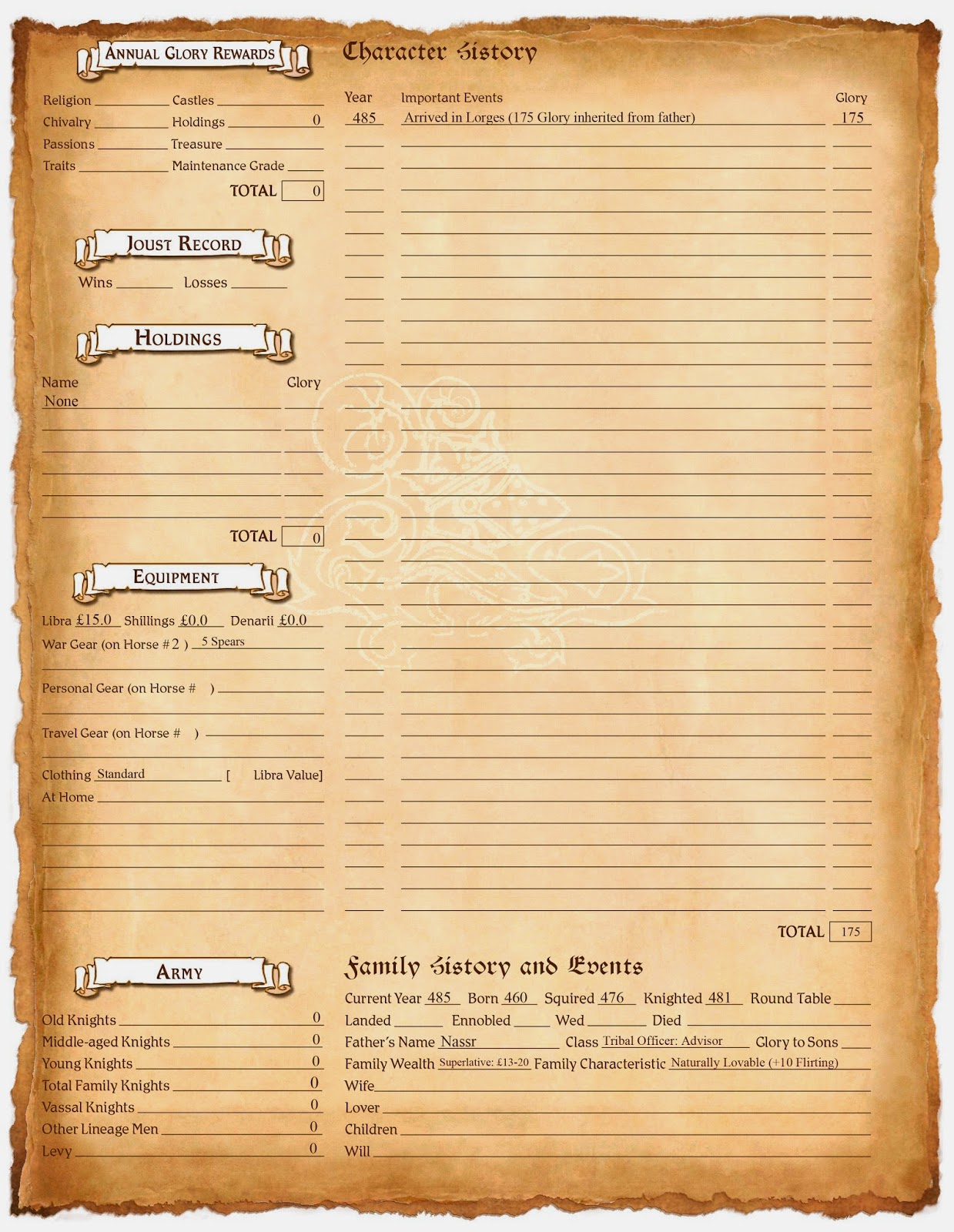 Posted by Jason Carter at 11:21 AM No comments: 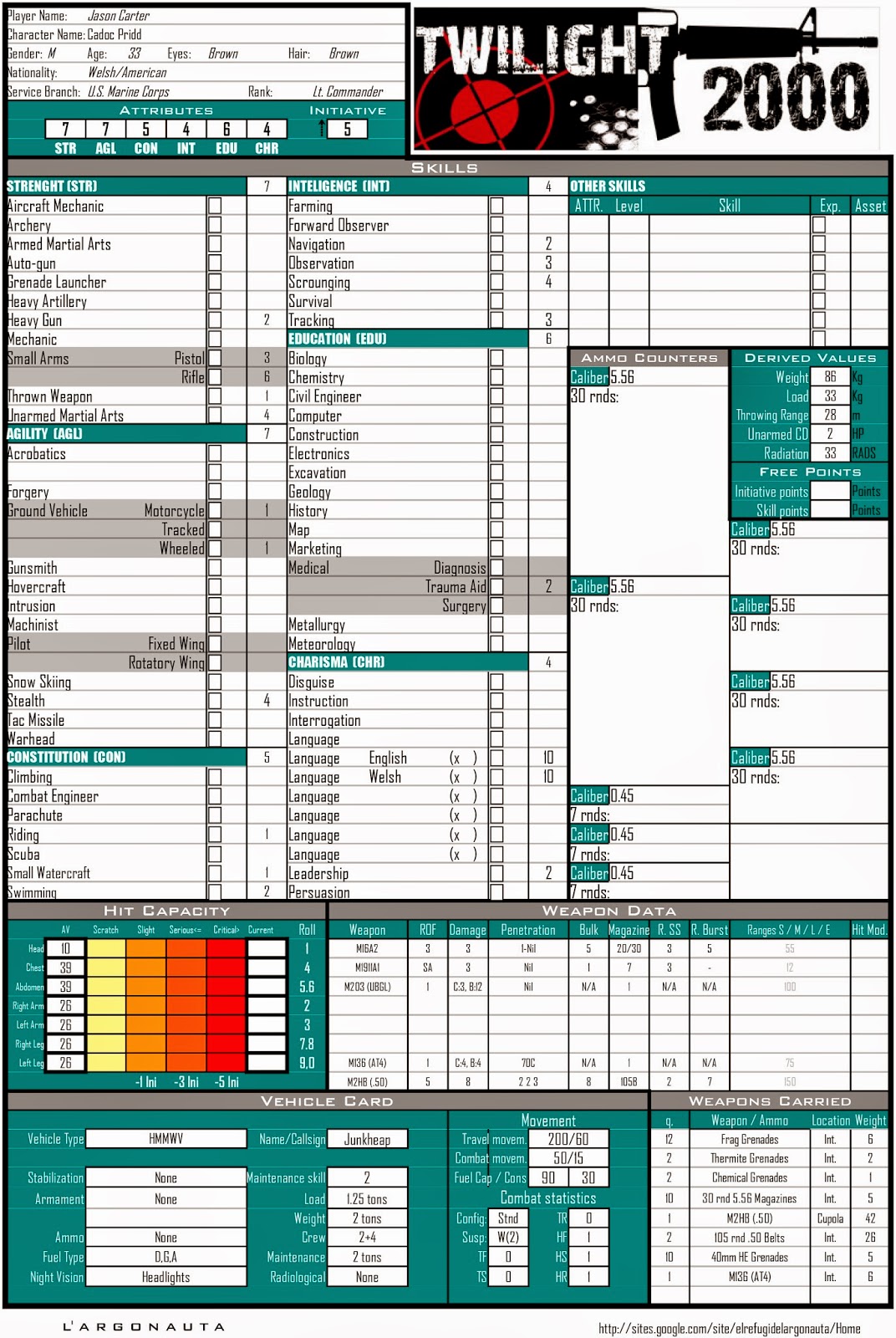 I finally finished up my Twilight: 2000 character I started a few days back. This is Cadoc Pridd, a Welsh-American that attended the U.S. Naval Academy and then served two tours as a Marine Corps Force Recon Officer before the war broke out. The character creation process in T2K is a bit overwhelming, maybe it was because this was the first character I have ever created or maybe it was the layout of the book but I found that locating the information I needed was not easy. That said I'm a big fan of the life-path system, I really enjoyed taking my character through the different stages of his life leading up to the beginning of the game, it really helps to flesh out ideas for the characters back-story.

There were a number of questions that came up during the creation process that I was unable to find answers to, not the end of the world though. There is an awful lot of stuff to track for this game and it took me a while to look up all the information in the manual which I must say is LOADED with charts, more than I like to see in a rulebook. Some of the information needed is buried in paragraph after paragraph of writing, making it hard to track down. I find that my taste in RPG's over the last few years has begun to lean more to the simple side. There was a time when I would have loved a rules heavy game that focused on recreating reality, these days I like games that are simple and fun, I would much prefer to focus on the story and not have to worry about the rules.

I've never actually played T2K but would be willing to give it a try, I love the premise of the game and the world they have created seems like fun, I'm just not sure if I could handle the extensive rules. 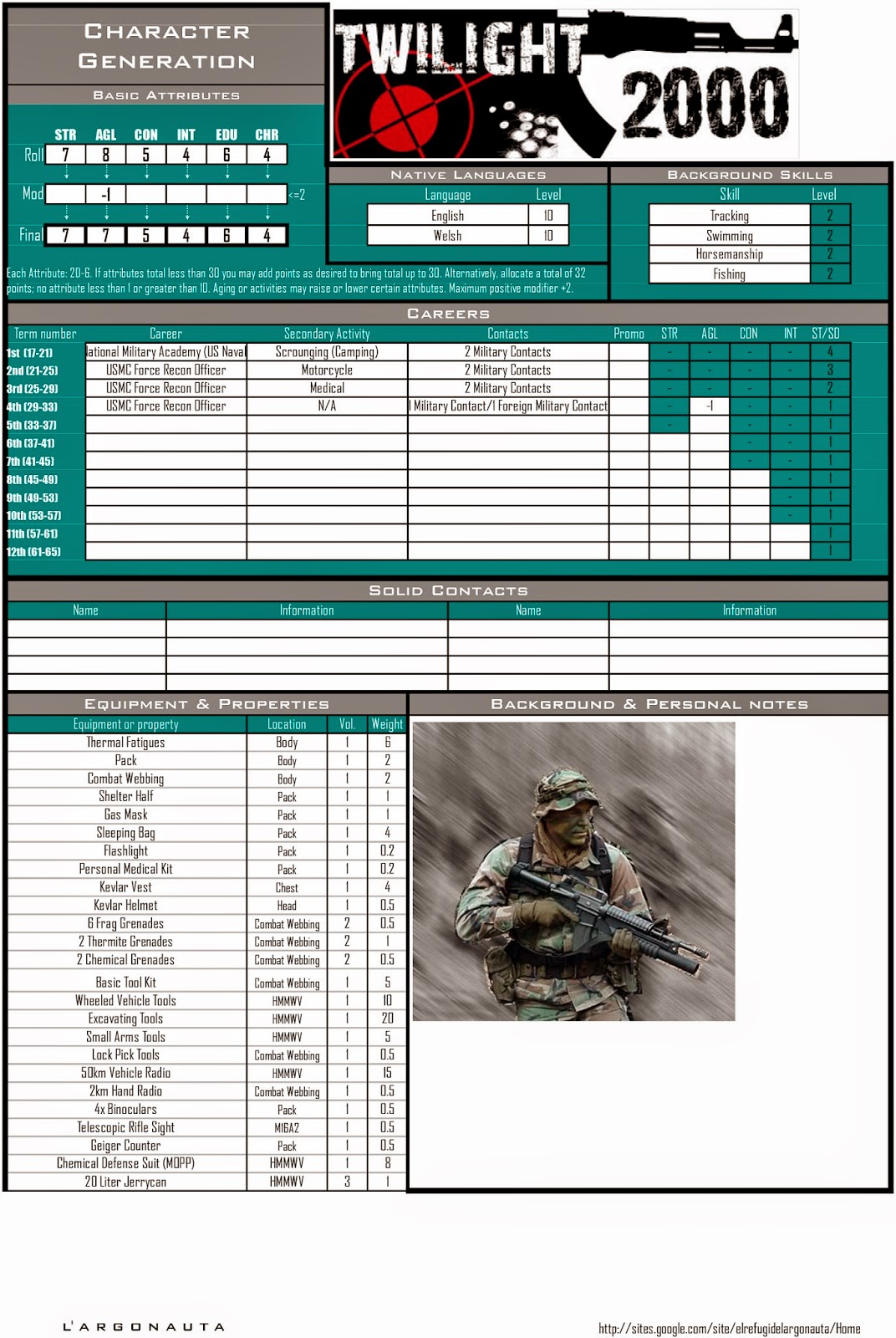 Posted by Jason Carter at 2:03 PM No comments: 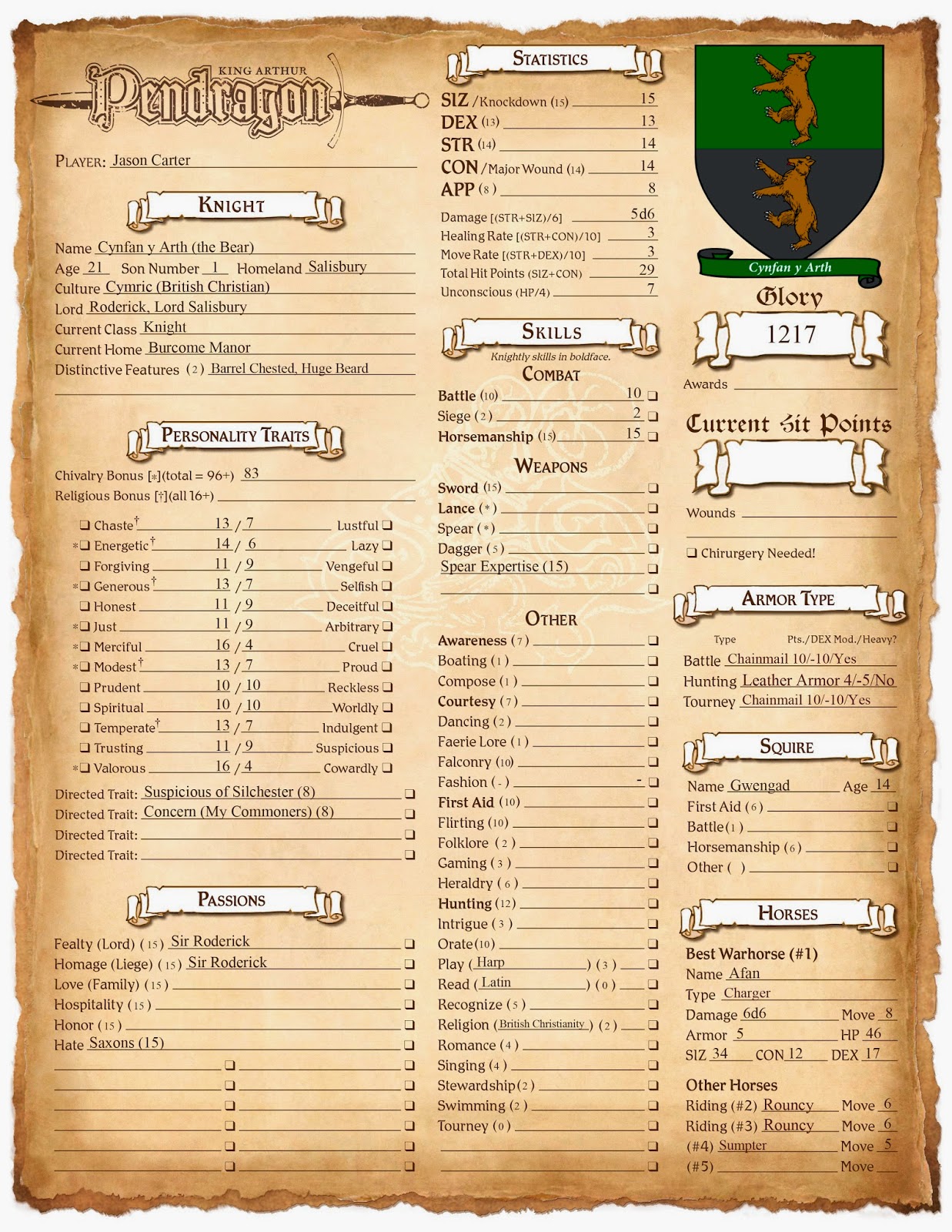 Say hello to Cynfan y Arth, he's a character I recently rolled up for Pendragon RPG. I've been pulling some of my old games down off the shelf and rolling up new toons for the heck of it. Cynfan is a Cymric Knight who was recently knighted and took over his father's manor, Burcome. He is known as "y Arth" (the Bear) due to his barrel chest and huge beard.

The character sheet I used is from a newly available PDF called the Book of Records, available from http://rpg.drivethrustuff.com/ for around four dollars. You can type right into it and then save your file, it's very handy. It also auto calculates the Glory you gain as well, good stuff all around!

The shield was created in a little program called Coat of Arms Design Studio, its available here; http://inkwellideas.com/coat_of_arms/  I believe it cost around 20 bucks, its a tad bit expensive and a bit finicky but overall it's a very nice tool for creating shield designs. You can add creatures or items, ordinaries (pale, scarpe, bend, quarter sinister, etc) or divisions (per chevron, bendy sinister, etc).  Each of these many options can be adjusted for color and location. To finish it up you can add a scroll (like the one at the bottom of the shield above) or mantling/helms at the top.

Here's the back of the character sheet: 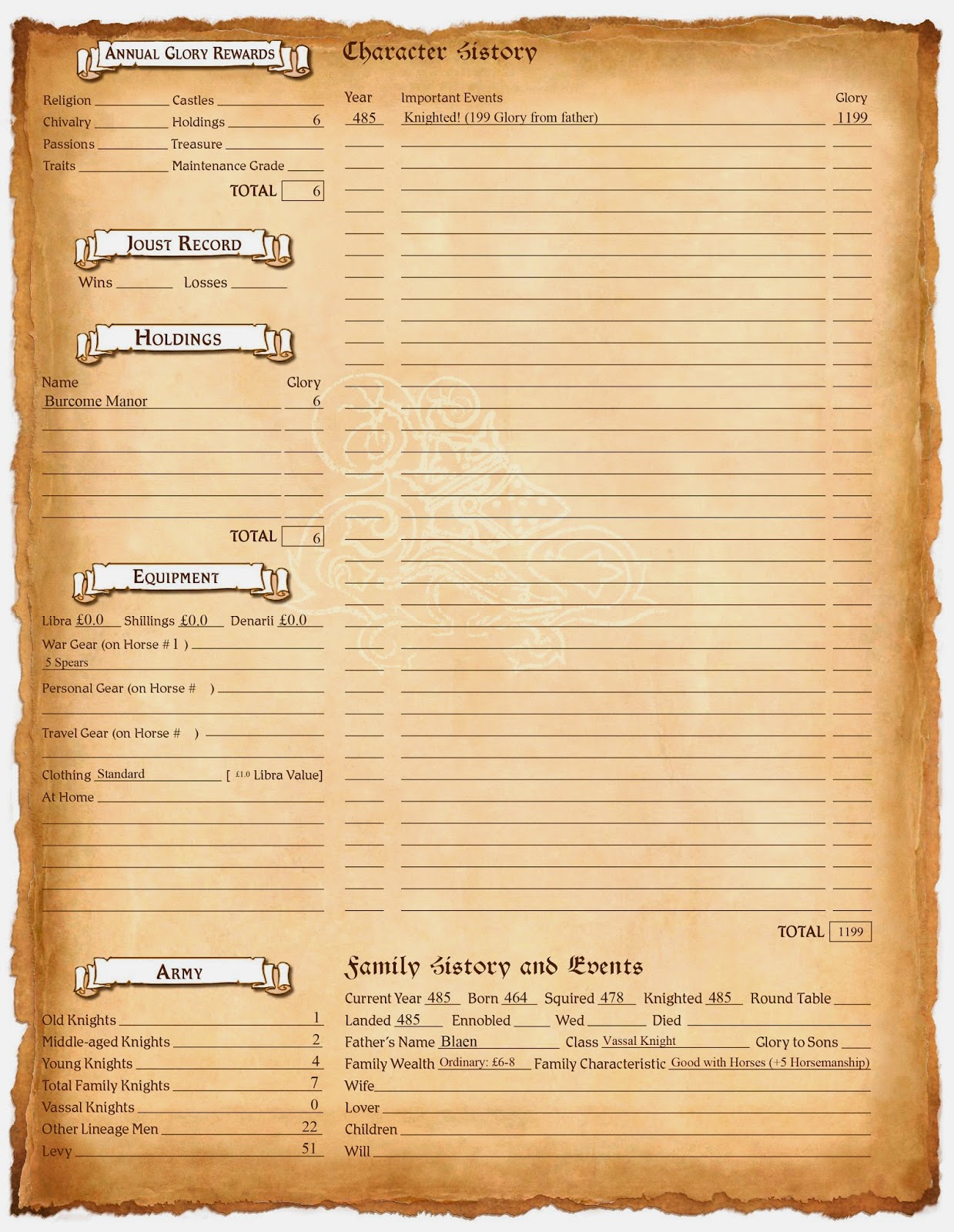 Overall I really like the look and function of this character sheet.  Its got a nice design and the ability to type right into the .pdf with only Acrobat Reader is really great.  Now I just need to find a game to join!

Posted by Jason Carter at 7:41 PM No comments: 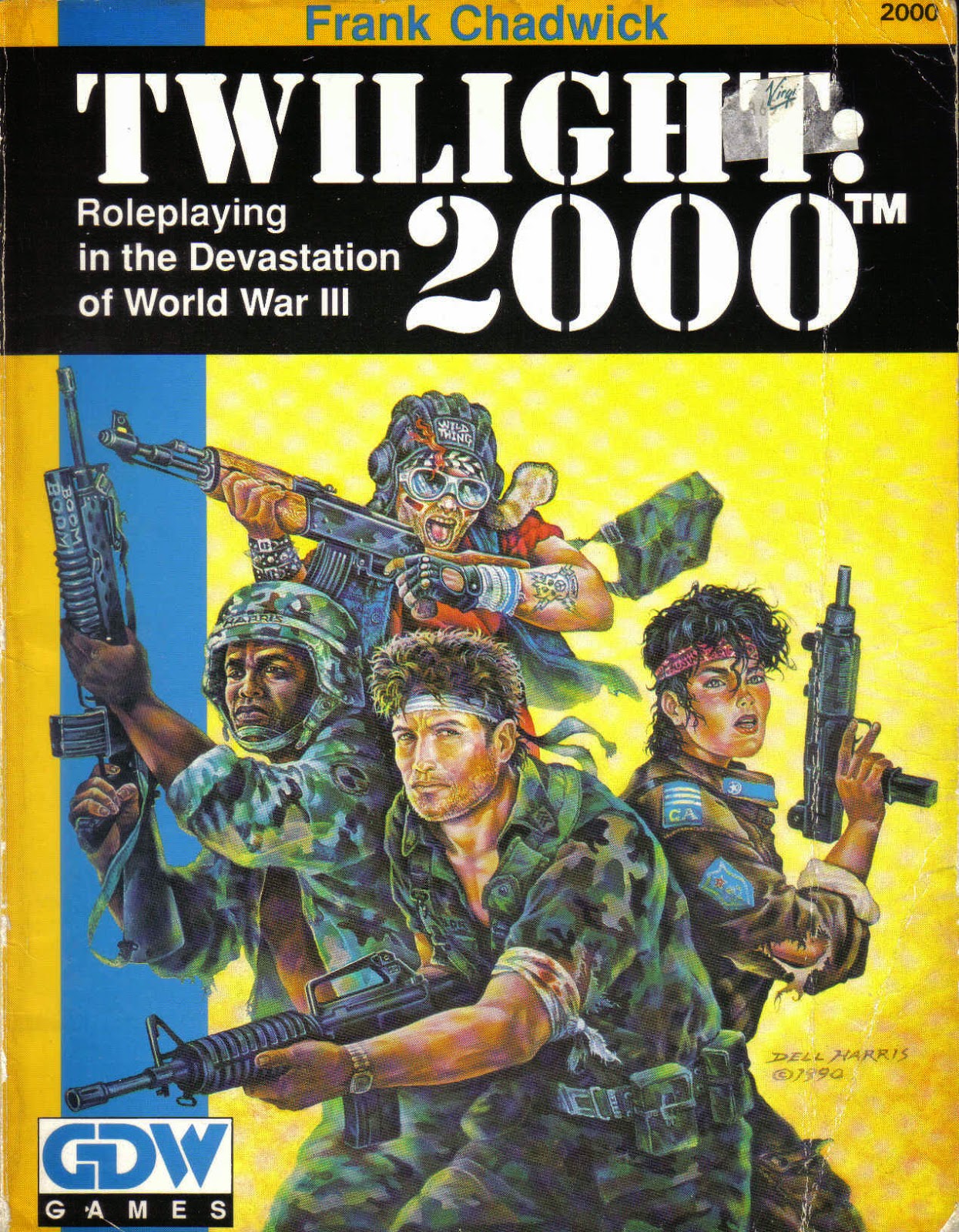 For many years I have wanted to play Twilight 2000 but its continued to sit on my shelf staring at me.  Well I got sick of the dirty looks so I pulled it down off the shelf and have decided to roll up a character.  I am mostly done but had a couple of questions that I hope you T2k fans can help me out with.

My toon qualified for National Military Academy (U.S. Naval Academy) for his first career block.  It states that you automatically get all the basic training for the appropriate branch (Army, Navy or Air Force), no problems so far.  For my next career block I took Force Recon Officer (U.S. Marine Corps).  Do I also get all of the U.S. Marine basic training skills in this block, or should I have substituted these during the education block (even though Marines is not listed as one of the branches)?

My only other question is whether the National Military Academy counts towards the total amount of money I receive for equipment.  My guess is that it counts as education and therefore does not grant additional monies for equipment.

Posted by Jason Carter at 4:27 PM No comments: