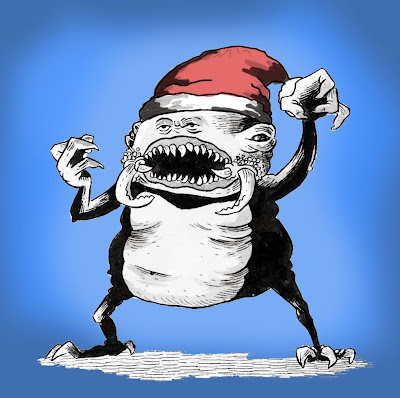 Happy holidays everyone!  I hope you all have a safe and fun holiday season.  May your presents be filled with gaming goodness and your bellies filled with tasty treats!

Posted by Jason Carter at 2:07 PM No comments:

My copy of Ogre arrived about two weeks ago, I finally had time to open it up and put everything together.  Here are a few pictures of the box and the completed pieces.  I'll post some more pics once the wife and I play our first game!

Posted by Jason Carter at 8:34 PM No comments:

Email ThisBlogThis!Share to TwitterShare to FacebookShare to Pinterest
Labels: Board Games, OGRE 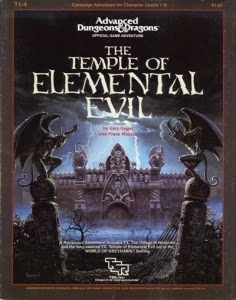 I had a chance to get together with my old gaming buddy this weekend and smash out some more of the Temple of Elemental Evil.  We began playing six to seven years ago and get together when we can.  We were (and still are) living in different states and don't get to play very often.  When we started out we were using VOIP and a whiteboard program (before google+ became the way to play) and then fell into a once or twice a year in person session.  It felt good to get back to DM'ing, we last played about a year and a half ago so I was feeling a bit rusty at first.

This is the first time I have run the Temple as DM having previously played through it once before when I was a wee lad.  It's my favorite adventure of all time and it was really fun to spend all weekend rolling dice, eating pizza, drinking beers and embracing my inner geek.

The party:
Vallon - Human Fighter & Surly Bastard
Marhev - Human Fighter (my toon but being run by my friends girlfriend)
Jess - Human Cleric with a dark soul
Kaila - Elf Wizard (holds the record for most deaths)
Rahan - Elf Rogue (nicknamed The Finisher for his ability to drop baddies with his bow, after spending the entire fight missing them)

Things started with the party heading back to the Temple from Verbobonc, Jess (the lawful good cleric) wanted to sack Nulb and put the occupants to the sword but was dissuaded by her fellow companions.They made their way to the Water Temple as they had previously cleared out the entire third floor except for pool room. They were unable to figure out the acid pool and almost lost Rahan after he jumped in the acid but was able to climb out of the pool before melting into a puddle of goo.  After some general shenanigans they decided to move on and attempt the fourth floor of DOOM.  Over the next few hours they explored all of the rooms south of the main temple and found them all to be empty of creatures, leaving them mystified.  Near the main altar of worship a portal opened that cut off their escape and all of the monsters from the level began pouring out.  Darting down a side hallway they stumbled into the portal that lead to the Air Node.  I had hoped to drive them into the nodes, I'm not sure if my players would have volunteered to go through without a push so it worked out well!

Upon entering the Air Node they found themselves pummeled by flying debris and they sought cover.  Heading east they began working their way counterclockwise around the edge of the node.  They spotted a white dragon flying high above them giving them a bit of a scare.  Pressing on they entered a cave system and found a dead Cloud Giant, his body blasted by ice.  Pushing further into the cave system they encountered a Frost Worm and a vicious battle ensued!  Using its Trill ability the Frost Worm froze several of the party in place and proceeded to tear into the rest.  Kaila was killed (again) by the beasts breath weapon and was finally felled by Rahan The Finisher (after he missed multiple times during the fight).  My friend was pretty upset that Kaila died (again), shes already fallen behind in levels due to her previous deaths but he decided to try and save her by casting Gentle Repose until we could get her resurrected.

Feeling defeated the party moved on, much more cautiously than before as we were now lacking our wizard. Continuing around the outer edge of the node they came upon a large cave filled with a giant boulder field.  Shortly after they began to maneuver through the field a small white dragon flew from deep in the cave and glided out the entrance through which they had come.  Rahan donned his invisibility ring and scouted ahead while the rest of the party took refuge in the shadows of the boulders.  He discovered the dragons treasure horde and spent a few rounds picking through it hoping the dragon would not return.  He found several small items of value including a silver box with a aquamarine gem in it.  Returning to the party they realized the gem was the perfect size to fit into the golden skull they were in possession of (the Orb of Golden Death).  Seizing the gem from the box they were all suddenly ripped from the Air Node and deposited in a splash into the center of the Water Node!  Shocked and surprised this is where the adventure ended as we were all a bit tired.

I am looking forward to playing again but it will probably be some time.  My players were sure that the fourth level was the final one and were surprised at the inclusion of the nodes.  They are slowly piecing together what they need to do to bring the temple low.  Next time should bring the conclusion to our many year adventure.  I'm looking forward to it!

Posted by Jason Carter at 3:41 PM No comments: