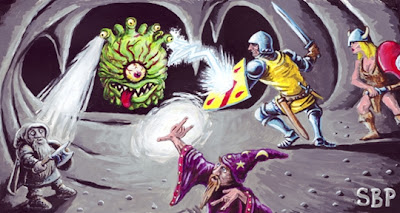 Our Favorite Artists is going to be a recurring interview with some of the best and brightest RPG artists out there.  To start things off we are speaking to artist Stefan Poag, you may have seen some of his recent work in the fantastic Labyrinth Lord mega-dungeon, Barrowmaze.  Stefan has also done work for a number of other projects including books and magazines published by Kenzer & Company, Goodman Games and Expeditious Retreat Press.  His artwork has a great retro style that brings me back to my younger years.  I'm glad he was able to take some time to speak with us!  Without further ado, here is the man himself!


I grew up in St. Louis, Missouri, after a childhood in (what was then) West Germany. My mother is German and my father was a teacher of German and a Medievalist, so we always had lots of books of medieval art around the house. At some point, I think my mother started buying a series of illustrated Time-Life books through the mail on different cultures through history --- 'The Neanderthals,' 'The Norsemen,' 'The Byzantines,' etc., and I spent a lot of time looking at those as well as the books of medieval illustrations, plus I loved the Japanese monster movies and TV shows like "Johnny Socko" and "Ultraman" that they used to show on the local UHF channel. A grade school friend of mine, Eric Piccione, and I used to draw our own 'comic books;' his favorite subject was "The Pirate" (a swashbuckling superhero with a cutlass). I don't think the Pirate had any special powers; I think he was just really bad-ass and would swing around on ropes, dodge bullets, etc. My favorite was a hero called (cough) "Ivanhoe." Ivanhoe was secretly an ordinary dude who worked in an office, but he had a special ring with a secret compartment in it that contained a button. When things went bad, the office guy pressed the button and thunder struck and he turned into a guy with a cape and a weird-looking octagonal helmet and a sword and a big "I" on his chest who could fly through the air and shoot bolts of lightning from his eyes. I don't think I had any explanation as to why he was called 'Ivanhoe' or where the powers came from --- my friend Eric, however, was having a great time drawing "The Pirate" and I wanted to do it, too. I barely graduated high school and slacked my way through college and have worked a series of menial jobs, usually doing some kind of creative thing on the side, then got into doing commercial photography (mostly shooting pictures of stuff for newspaper advertisements). My significant other, Annie, got a teaching job in Michigan and we have been up here for years. The bottom fell out of the local commercial photography scene and I got burned out on that, after doing a few other things I am now a literacy tutor in Detroit Public Schools, trying to help high school kids improve their reading skills. Given what a bad student I was, this is kind of ironic, but I always enjoyed reading so this is a good fit for me. 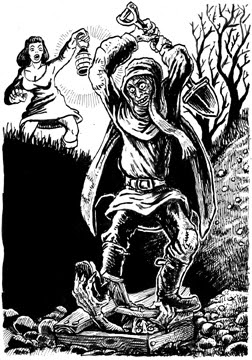 I don't know. I have always enjoyed drawing, but don't think as a kid I did a lot of 'finished drawings' where I tried to draw everything right --- usually I just wanted to get stuff down as quick as possible. When I was a kid, I used to take big sheets of paper and draw two armies, one on the left and one on the right side of the page, with tanks and cannons and planes, etc. When the drawing was done, I would draw a line from one tank or cannon to the other side of the page and then scribble over the enemy tank or plane that had been hit like it was exploding and do this, back and forth, across the page until it was just a mess of lines and scribbles, probably making the sound effects the whole time... or I was drawing monsters... Godzilla and similar stuff. When I started drawing comic books with my friend Eric, that really inspired me. We were simultaneous collaborators and competitors --- we each egged the other guy on... "C'mon, draw another page --- finish that!" I also had a friend in grade school named Philip who taught me a lot about drawing just from seeing how he did it. I remember seeing him draw a head composed of a series of curves that fit together to form the face; one curved line for the cheek, another for the ear, another for the jaw, etc., rather than just drawing a circle and then sticking some eyes, nose and mouth on it, and that was a revelation for me. This must have been in 5th or 6th grade, but it really made a big impression on me, because I could see the potential in it --- how lines would add up to a 3 dimensional representation.


I guess I feel like I grew up with a foot in the 'high brow' world of history and art via the books and the exposure I got from my father and mother --- when we lived in Europe we spent a lot of time in museums and cathedrals, and all of those books we had around the house made a big impression on me...plus my mother once bought me a really weird and great book about surrealist art that had stuff by Max Ernst, Leonora Carrington and DeChirico in there that I enjoyed... another time she bought me a big book about Max Beckmann --- so I think my mother really encouraged my interests in art... and meanwhile I always had the other foot was in the 'lowbrow' world of comics, monster and horror movies, etc. I love old stuff like Albrecht Durer, Goya, Bosch, etc., as well as Jack Kirby, Basil Wolverton, Steve Ditko, etc. Then a friend introduced me to Dungeons & Dragons and it was love at first sight, especially when I cracked open the monster manual and saw all those monsters, each one illustrated and little paragraphs telling you where they lived, what they ate and how much treasure they had. I really loved the drawings by Erol Otus, Rosloff and Dave Trampier best of all of the old TSR stuff. Trampier's cover for the Player's Handbook, with the big demon idol and they guys prying the gemstone out of it's eye, is my favorite I think --- or Erol Otus's cover for the Gamma World Referee Screen.


I don't know? Comic book cross-pollinated with medieval marginalia with a shot of old pulp and fantasy art?


See "favorite work" above. I'm also really drawn to the work of these 'naive' or 'self taught' artists like Henry Darger or Wolfi or Richard Shaver or Reverend Finster --- mostly because it seems to spring from deep inside them somewhere and they are just making this stuff compulsively. I've been interested in older comic books and pulp illustrations for a long time now --- I love the stuff that Dick Calkins was drawing for 'Buck Rogers' in the 1940s -- the technology he draws is all chunky and blocky and covered in rivets, and Raymond's "Flash Gordon" is pure gold. V.C. Hamlin's old "Alley Oop" strips are also great; he leaves these big patches of white that really set off the dense crosshatching he will do elsewhere in the same panel which often gives the picture a sense of atmosphere through very simple means --- whenever I look at some of the old black and white work that these guys did back in the day, it makes me want to try to do more, visually, with less. I sometimes feel like I 'overwork' some of my pictures and just put too many hatch-lines in there. I've collected hundreds of scans of old pulp covers; 'Weird Tales' and similar, from the net (I can't afford the real things) and like looking at those, even though they were long out of print before I was born and I usually don't know who the artist is. Virgil Finlay, Hannes Bok and Frank Paul. I'm always finding new stuff to be excited by --- that's one of the great things about being an artist today; with the internet, so much great stuff is just a click away and friends from all over can send you links and ask, "Have you seen/heard/read this?" There is so much great stuff to look at out there. 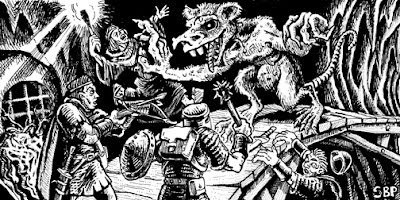 No; the number of commissions I get varies a lot and I'm not famous or anything so collectors are not exactly falling all over each other to buy my work for top dollar. But I enjoy doing it; that is the main thing.


I like old-school D&D and the old edition of Gamma World but don't get to play altogether that often. Part of it is my schedule, part of it is just wanting to spend more time working on my art.


I like a lot of really different things --- everything from Creedence Clearwater Revival to Skaten!gs. I go through phases where I get stuck on something and play it till I am sick of it and have to put it away for a while. Right now, Stupeflip and Cypress Hill are in heavy rotation. Tom Waites has a new record out; we listened to that the other night and I really enjoyed it.

Don't give up --- and try to never listen to people who are communicating dishonestly with you. I am trying to keep my focus on doing work I enjoy, I guess; that has been my biggest struggle. Some people are going to hate everything you do no matter what, so I try to ignore them... those people usually have strange motivations for trying to discourage you... when I was in school there was always someone ripping on other people because I guess they thought it made them look better... maybe they though art class was graded on a curve or something... unfortunately, some people have a pretty perverted sense of self interest. Other people just can't believe you don't automatically share their point of view. If they like salami sandwiches or Sammy Hagar or the color blue they just won't let it go if you don't say you like those things as much as they do --- I guess some people just want the world to reflect what they like back at them --- don't listen to those people either. I don't think I will ever be rich or famous; I just want to be more content... and I wouldn't mind more financial security since it would help me relax and enjoy art and life more. I've spent too much time worrying that I wasn't good enough or down on myself because not everyone else loved what I was doing... and that's poisonous thinking; you need to avoid that rut. The best feeling in the world is when you wake up and can't wait to start drawing or painting or whatever it is that you want to do --- all the negative shit in life just poisons that creative spring, though. I'd like to try to get back to the state of mind I was in when I was drawing those big battle scenes as a kid --- I don't think I was trying to create an 'artwork' at that moment, I was just enjoying the act of drawing and making shit up. Which is what I think it is all about, at least for me. So I guess my advice is to try to figure out what you want to do and try to go for it. Which sounds simple but it's not. Figuring out what you want has been the hardest thing for me --- I'm still struggling with it. I guess that is the process of living. 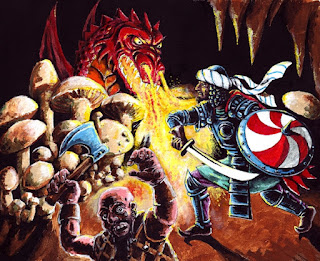